Who’s out there? When and Why 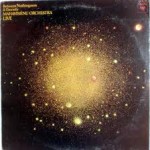 other astrophysicists for proof that the universe is not only expanding, but that this is accelerating, i.e. the universe is expanding faster and faster as time goes on. The most likely reason: a mysterious cosmic force known as dark energy.

I’m not going to concern myself at the moment with what “dark energy” is (or even – to paraphrase Bill Clinton about another type of energy – that it depends on what “is” is).

So let’s look at the possibility that the universe is expanding into nothing. But if nothing is Nothing (the absence of everything), then the mind boggles at a universe expanding into it. It? I can’t even say that it depends upon what “it” is; I don’t care what “it” is. “It” is something. Always. “It” can’t be Nothing.

OK, so let’s say that nothing is not Nothing, but that it is nothingness (the absence of something). But if we do that, then we are back to the problem of the universe having something outside it. After all, nothingness is something. (Read the book if you’ve lost me).

We are now in a real quandary – as opposed to the small quandary at the start of this message: The universe cannot expand into Nothing, even though that is the only – ooops, I almost wrote “thing” – possibility. But of course it isn’t a possibility, since Nothing cannot be expanded into.

There is, of course, no way out of this conundrum, since positing that the universe is expanding into Nothing would mean that Nothing becomes something. And we all know – apart from believers in God and in Quantum mechanics (and I’m going to get more attacks for that from followers of the latter than of the former), that that is impossible.

So while I have the utmost respect for Riess and his colleagues, I am left scratching my head. I presume they have an answer to my questions, and I also feel that I wouldn’t understand it.

But if they do explain it, perhaps they deserve a second Nobel Prize: for showing how something can be created from nothing. It’s supposedly only been done once before.

4 comments on “Expanding into what?”