The me, me, me generation People are everything, even for “nothing”

Thinking out of the box

We hear it all the time, and it’s always c 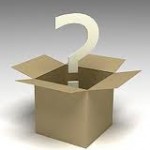 omplimentary. When someone thinks out of the box, he/she is supposedly thinking differently, in a way that is unrestricted by previously conceived ideas.

Is it really possible to think out of the box? What box, in fact? If the expression refers to the box that is our individual head/mind, then it’s not such a big deal. After all, we are supposed to get ideas from others and so enhance our own way of thinking. But that’s not “the box” referred to in the expression.

The box is our mind. Nobody can think out of the box. Nobody ever has. Anything that we can think of is what already is. Everything that has ever been invented is based on something that came before. Isaac Newton, as great a thinker and scientist that he was, understood that what he discovered was based on what others before him had worked on. With frankness and humility he said: “If I have seen further it is by standing on the shoulders of giants”.

It is sad but true: our boxes are limited. We can make combinations of what is inside, but thinking of something absolutely and uniquely new is impossible. We can imagine unicorns, for example, even if they don’t exist as actual live creatures in nature; imagining a horse with a horn will give us a picture of a unicorn in our minds. We can even understand the notion of the bending of space and time, even though we can’t grasp the concept itself; we know what it means when something is bent and accept physicists’ explanation of the phenomenon occurring within our universe.

We cannot, though, imagine what is ungraspable. However innovative sci-fi movies are, they can never come up with aliens different from what we can imagine; little green men or slimy blobs with three heads, or whatever, are just combinations of what we know.

So are we stuck? Will we never really be able to think out of the box? Possibly. But it shouldn’t matter, since even if we accept it, we can also see how much we have advanced through the ages and how many more innovations come into being all the time.

It’s not a matter of thinking outside the box, but of the wonder of the box we do have. The fact that it is infinitely flexible within its own limitations is itself a wonder. And the fact that its innovative capability is due to, and dependent on, its links with other boxes that constitute humanity, allows us to understand that we, as individuals, are not alone and are not meant to be alone.

What we do best is to think within the box, as part of the matrix of boxes that is humankind.

Tagged with: innovation • Newton • thinking • thinking outside the box • unicorns

5 comments on “Thinking out of the box”