Was there always something? “The sky isn’t blue, it’s just our perception of it.” 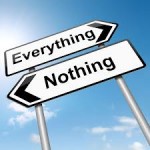 I can’t believe how long it is since I last posted a blog here. I did feel that some time had passed – but 18 months? Tempus fugit. It sounds better in Latin to disguise that I have been remiss.

The problem with writing blogs is that it takes away from other things that I should be doing, one major activity being working on my next book. And when I think of it, I wonder why I should be writing a blog at all. I mean, why do people carry out this time consuming activity? Presumably because they have time to consume, and if they do, they may as well bash away at their keyboards, letting the world know – well, at least that part of the world that sees the results of the bashing – of what is important.

The point, though, is that blogging is important, at least for the people who are subscribed to a particular blog. And I assume that there are quite a few people out there who are interested in what I have to say – especially as it is mostly about “nothing” at the moment. Don’t get me wrong: I do have other things that I go on about (sometimes too much, as my friends would, no doubt, say), and quite a bit of it is on the Virtual Muser, a great forum on Facebook, of which, by the way I am an Admin (FB shortened version of administrator, which seems to look more important if I use a capital ‘A’).

I was reminded last week that there are as many people interested in nothing as there are about something. Twice last week I had really lively, interesting and interested crowds in Newcastle-upon-Tyne and in Horsham in what was advertised as a talk about nothing – “Why Nothing Matters”. I must be honest here: I don’t really know that; since I don’t usually speak about something and/or anything, I don’t know how many people would have come out for something rather than for nothing.

But of course discussing nothing is nothing new. For some 2,500 years people have been wondering about nothing, the negation of what is. It isn’t surprising that Aristotle, who had an opinion about everything, was interested in nothing as well. He looked up at the skies and saw the stars, not accepting that there was nothing between them. And while he was wrong (he believed that there must be a god holding up and moving the stars), he was right that the vast spaces were not empty. He was right for the wrong reasons; today we know that there is no such thing as absolutely nothing. What we used to call “nothing” – some 83% of the universe – is thought to contain “dark matter” and subject to “dark energy.”

And so it went on through, to mention just a very few, Parmenides, Galileo, Descartes, Newton, Einstein, Hegel, Sartre, Heidegger… who had something to say about nothing.

Those of us who are keen on nothing are, in other words, in good company – past and present.

2 comments on “Back to Nothing”