Is it possible to think of nothing? Was there always something?

A personal look at nothing. Or what has nothing done for me? 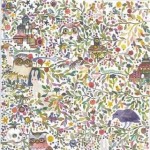 “Did your research into ‘nothing’ make any difference to you personally? Did it affect you and the way you think?”

That was one of the questions at the end of my talk in Westminster Library, and it stopped me in my tracks. Unlike all the other questions, not only was this personal but it was, strangely, one I hadn’t even thought about beforehand.

The fact is that my long look into “nothing” did change me. It would have been strange if it hadn’t; after all, the main contention of my book was that thinking about the world through “nothing” changes the way we look at things. And I had been thinking about nothing for five years!

I don’t know what first made me think about “nothing” seriously. I do know, though, that the urge was in me to look at life in a different way, from a different angle. If most of the universe consists of  space – non-matter -wouldn’t it, surely, be a good idea to look at it from that perspective, rather than from matter? Looking at something from nothing, rather than the other way round. Perhaps, in fact, nothing matters.

I am neither a cosmologist nor an expert on quantum mechanics. But my delving into the possibility of something coming from nothing got me looking at the explanations posited for such a thing to occur and increased my already natural scepticism. A universe from nothing? Big Bang theory? Very nice, but “almost nothing” is not nothing, however close to nothing it is.

And so it is that I look askance at the way real physicists and cosmologists treat genuine problems by brushing them away. Take Lawrence Krauss, who  desperately wants to explain how a universe could come from nothing. I don’t blame him for needing to confront the embarrassment of the Big Bang theory, described by John Wheeler, the scientist who coined the term ‘Black Hole’, as “the greatest crisis in physics”. How does Krauss do so? By simply saying that nothing isn’t really nothing. And for good measure he is angry that philosophers insist that nothing is not the way he would like it to be.

Did it make me more sceptical? It certainly did, even though the not-insignificant level of scepticism I already had helped me to look at things from the outside, as it were.

Apart from the knowledge I acquired about so much – and it really is amazing how many things are connected to “nothing” in some way – I feel I have changed in some fundamental way. For a start, I understand not only that there are different ways to tackle problems, but that I am capable of looking at them at an angle that would have been impossible for me in the past.

At the most practical level, I have changed fundamentally when it comes to art. If until recently I dismissed conceptual art because “I don’t understand it” and thus not worth bothering about, I have dramatically changed my views. Instead of treating art as if it needs to be purely of the heart, viz. that one is supposed to be affected emotionally, I now understand that art does not have to be “beautiful” in order to satisfy. Feelings are important, but so are thoughts. In other words, art can, and should, affect the mind, not only the heart.

I have heard often the notion that the function of art is to communicate the artist’s ideas or message. It is easy to admire a painting of nature or of a person. But how does an artist communicate an abstract idea? For us to understand that idea, we need to do more than use our eyes.

Artists strive to get their ideas across, as do writers and musicians. Not all is easy to understand without some effort. Is it worth the effort? I believe it is.

So what has nothing done for me? Not everything, but a lot.